Clothing has been made from Nettles for at least the past 2,000 years. Nettles only lost their popularity when cotton arrived in the 16th century, when *ahem* ‘foreign labour’ made cotton cheaper to import. Though ‘high society’ wore cotton, or silk – many people in the British Isles, and especially the landless, peasant communities actually kept alive their folk traditions, of weaving Nettles into textiles until relatively recently. Nettles also made a brief comeback during the First World War, when Germany suffered a shortage of cotton due to trade embargo’s and other sanctions kept afloat by British naval superiority – which resulted in nettles being used to produce German army uniforms, only to be relegated to obscurity again shortly after. Which is a bloody shame!

They are at-least as full of potential as the ever-popular hemp plant, and are well adapted to growth in colder, European climates.

Stinging Nettle fibres have very special characteristics, like wool, they are hollow which means they can accumulate air inside giving them good natural insulation properties. The final woven fabric is similar to linen- but much stronger, and the strength of the fibres actually increases when wet! Nettles grow almost uncontrollably, making them a quickly renewable resource, they are also a clumping perennial, growing back from the same networks of underground roots, year after year; helping to maintain soil fertility by providing a stable environment for soil-biology to thrive, meaning they can actually build soils – rather than deplete them!

Seemingly, Nettles have proven resistant to this model of production… for now.

Although, Professor Harwood of the textile engineering and materials research group at Leicester’s De Montfort University, is involved in the first contemporary British project to develop nettles into a modern fabric. The project is called Sting, which stands for Sustainable Technologies in Nettle Growing – and it was started in 2004. He believes that the future of British textiles lies in the common stinging Nettle (urtica dioica) and his work proves successful, we may all be wearing nettle T-shirts in ten years’ time.

Harwood himself, seems at least sympathetic to the problems caused by the industrial-textile-complex and is very vocal about not wanted his Nettle revolution to spin-off into just another fashionable “flash in the pan.”

He believes that Nettles could help to revive Britain’s rural economy, providing gainful employment for depressed rural communities. This may well be the case, although we would put it to him, that perhaps the reason that this most ancient of peripheral pursuits, has yet to re-emerge as part of Britain’s thriving ‘green economy,’ has more to do with the economic and political injustices which led to the loss of the skills and traditions of self-sufficiency (once well entrenched in these Isles), in the first place and which continue, unresolved still today. Namely, that our land-distribution is more concentrated here in the Former United Kingdom, than in almost any other country on Earth!

Another reason why Nettles are missing from the world of British textiles is likely due to their being seen, historically, as a ‘vulgar’ crop used by peasants and rustics – which is, in all likelihood, also the reason for their absence in the diet of ‘civilised’ (urban, domesticated) people – more fool them, for Nettles are the original ‘super-food’.

What about the sting?

The stinging hairs (trichomes) of the common North American nettle (Urtica dioica) are sharp, pointed cells. These nucleated cells are embedded in a base of smaller epidermal cells. The shaft of the trichome is composed of silica. Upon touch, the tip breaks off, leaving a sharp tip similar to a hypodermic needle. The hollow trichome penetrates the skin, and toxin from the base is injected into the skin tissue. (Online Textbook of Natural History).

The sting is taken away during one of the first stages of processing. Interestingly enough, it used to be thought that the main ingredient of the sting was formic acid – the same chemical used by ants. Although formic acid is present in the sting, recent research has shown that the main chemicals are histamine, acetylcholine and 5-hydroxytryptamine (serotonin). A fourth ingredient has yet to be identified.

Aside from their versatilities within the world of fibre, stinging nettles are a great source of nutrition. As someone who has spent a good chunk of his adult life living in what most Western techno-peasants would consider ‘rustic conditions,’ whether that be living in simple shelters, or on back-to-the-land projects, squatted farms, or just by myself – camping out in the woods, sometimes for weeks (even months) at a time. I have developed a heart-felt fondness for the common nettle. 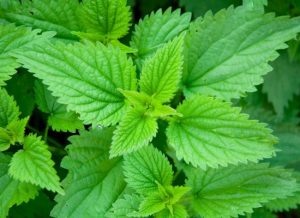 Often available through-out the year, if growing in a sheltered spot, Nettles live straight through all but the harshest of winters… the only other time their leaves are not safe to eat, is when the seed has ‘set’ seed, and also the few weeks in the run-up to the seeds ripening. This is due to the plant developing some pretty toxic chemicals, to protect it’s young from predation by Germanic spinners and wild-foodies alike. Though, it must be said that at this time the seeds are ripe, or ripening – and that they themselves are edible, either boiled, or pan fried (I’d soak ’em for a bit first though), and are said to be as nutritious as the fashionable (imported) ‘super-food,’ Chia seeds and are, in all probably better suited to the native metabolism, too.

Fresh young leaves, cooked with some butter and fresh mushrooms, or used as a (far superior) substitute to spinach, Nettles can also be dried, and then re-hydrated shortly before use – or just crumbled straight into soups and stews. One of the nicest ways to consume the Nettle leaf, is to make a very strong tea – steep the Nettles in water, gently simmering for a good 20 minutes or more, then simply leave the Nettles in the hot water, over night. Pressure cookers work especially well for this process, as they retain the heat for longer. In the morning, the resulting liquid will have cooler, and turned more like the consistency of milk rather than water – drinking this ‘Nettle milk,’ will leave you in no doubt as to the nutritional content of the plant.

As the famous saying goes…

Grasp the Nettle, by the sting!

1 thought on “Nettles: Fibre of the Landless!”