Generally when you come across an “anarchist” or “radical” on the internet, you are rarely wrong to automatically assume it is a liberal — that is, a left-centre, aspiring young capitalist and a bootlicker. They are merely temporarily confused about their political identity and psychology. It is particularly a safe bet for younger people, from the natural artefact of their not having been alive long enough to really think their way out of their confusion, if any truly profound thought has occurred to them yet at all. They might also merely be claiming the description as part of their small, fairly-sanitary act of social rebellion, spurred on by the angst of the prolonged adolescenthood enforced by modern societies. It might upset their parents and parish, after all, with the scandal of it, and any of the aesthetics that go with their politic scene, be it punk clothing or unnaturally-dyed hair. Oh, that wild and crazy rascal!

However, we are late enough into the decades of postmodernism — of all lack of fidelity towards anything resembling coherent and critical thought — that it is not unusual to stumble across older/aging radicals-cum-liberals, they being the first generation, the first disciples, of this (anti-) logic of “late capitalism.” Their favoured morality — or rather, the duplicitous pretext thereof — is a concern over “oppression” and the “intersectionality” of various marginalisations, the many theoretical components of which were already en route to being solidified in the anthropological and social realms of the Academy as early as the 1960s in numerous Western countries. According to the observations of D’Andrade in his “Moral Models in Anthropology” (1995), this “radical” moral model at last got its wings and took flight in popular imagination in and after the 1980s, due to its chimaeric infusion with the postmodernist school of thought and theory incubated in the previous decades. While the foundational postmodernists sought to critically deconstruct the relationship between physical realities and our language-related understanding of it, if that is to their praise, their since and many mediocre disciples have used their methods and rhetoric for little else but to dishonestly or semi-psychotically dismiss all arguments contrary to their own assertions or agenda — sometimes to the point of, with glaring psychosis, declaring objective reality itself illusory or “impossible…” and that is just the objective fact.

It was the perfect socio-psychological facilitator, in short, to what is now being referred to as “woke capitalism” — the aforementioned logic of late-capitalism, a religion followed by a phalanx of self-flagellants who profess heartbreak for the evils of capitalistic hierarchy which bestows them with their own “privilege,” and offering allyship for the most oppressed and deprived…but, once their Sunday mass or confessionals are concluded, they will rather happily continue to participate in and uphold the capitalist depredations that perpetuate such oppression and enslavement. In other words, they can profess one thing, one stance — insert “radical” cause here — and do quite the opposite — continue to abuse or exploit the peoples they claim to fight for — because, “reality” being whatever one wants to think or say about it, one can construct whatever “narrative” suits one’s fancy. In this instance, it is that they are saints or freedom fighters battling for the salvation of this or that people, and actual consequences or actions be damned and dismissed. The fact that many who subscribe to this fantastical moral model and its comically-tacky soapbox scripts are solidly middle-class and, as such, have not and will likely never have to suffer, and have neither concept of nor desire to sacrifice some significant part of themselves and livelihood in an actual commitment to fight alongside the oppressed, is very problematic indeed to their fantasy of saviourhood and/or rebellion. So, simply argue it all away with the proclamation that there is nothing objective, no standards or references of any account, and then use whatever obscurest, academic psychobabble one can cast about to bewilder one’s opponent within a pretentious web of semantics. Thus are the hordes of O’Briens in the radical or anarcho-something-or-other scene, who, like the eponymous 1984 villain, believe only in power and self-aggrandisement, justified by the mentality that truth — and reality itself — is whatever one wishes to make of it

D’Andrade does an excellent and thorough job at addressing this moral model’s signs and failings as it stood (and continues to stand) in sociocultural anthropology — of these, many easily extend or apply to the current “activist,” “radical,” “anarchist,” or “social justice” scene, given that sociocultural anthropology is largely the originator of their moralising theories. It is my purpose to enumerate only a few such discernible signs from my own experience, those that seem to be some of the more frequent encounters on the radical idiosphere of social media and in the rare occasion that one encounters these living caricatures in their abhorred realm of physical reality. The fastest litmus tests one can use to discern the radically-masquerading liberal,  spoken from experience, are as follows:

If the suspects are, corresponding to the tests above, either horrified or turned rabid by your problematic language; if they assign one’s distrust towards said institutions as “nutty” or “conspiracy theorist;” or if they dismiss or deride class/hierarchy altogether and insist racial-sexual-intersectionality is all where it is at — that’s all true positives for a liberal-cum-wannabe-radical. There are plenty of other reliable signs that more or less fall under or are related to one of those tests. For instance, and a personal favourite of mine — candidly stating that you don’t think white people wearing dreadlocks is cultural appropriation often times makes those sorts completely lose their shit, and it somewhat falls under the impolite/problematic language category. Using the word “tranny,” as another example, when jokingly referring to transsexuals, also provokes the same apoplectic rage in many of them. Perhaps because their provenance is the control of language, and the construction of an imaginary, dogmatic world and scenarios in it which only vaguely resembles reality, your perceived profanity and playfulness with language is as mortal a sin to them as murder might be to an average joe. You are, after all, challenging their fantasy, their little kingdoms, the source of their pseudo-creation, the seats of their power or sainthoods — and that is very problematic, when that is their chief concern, their own elevation.

One sign which falls under their aversion towards challenging the authoritarian structures facilitating capitalism is their preaching or posting in profusion much to do with “anti-racism”— like so much bravado about how they revile “racist white trash,” skinheads, or neo-nazis, so much so that they wish to punch/fight them — but little to nothing about the indignities regularly wrought in the workplace, on whole ethnic communities deemed “primitive” or “unproductive,” and on entire regions of the globe by governments and corporate entities. You know — the sorts of people and structures that enact racial violence on a staggeringly mass scale, unlike the odd skinhead who likes to post mean things on Facebook and who may never have the balls to actually attack anyone for his ideology. They very likely prefer to avoid the subject, because that would be ~problematically~ challenging capitalism and authority (and their source of bread and comfort, as such) — and while that’s the name of the game for an anarchist, that’s not the liberal’s cup of tea.

In this aversion, they reveal their outright contempt for the “people of colour” many of them claim to champion for or stand in “solidarity” with. It is easily illustrated in, again, their indulging in the luxuries of bourgeois life under globalised capitalism, which is built upon the suffering of their lip-serviced “allies.” But they also betray their contempt in many other ways. Most of those “ethnics,” after all, are rather “conservative” when it comes to their cultural values, be that embodied in maintaining a family organisation smacking of “patriarchy,” a culture of machismo (what I have seen lumped into “toxic masculinity”), devotion to religious or spiritual traditions, “homophobic” attitudes, etc.. All quite “backwards,” “savage” — adverse to the “progressive” ideals of liberalism and its “woke” child.

And so, like his liberal predecessor, the radical-cum-liberal often takes it upon himself to “kill the Indian and save the man” — that is, he often only cherishes and wants to uphold the praised “person of colour” and his culture if such conforms to a Utopian idea of what a “true” type of his ethnicity is supposed to look like (which almost invariably is a peace-loving and docile people, suspiciously conforming to liberal ideals). Anything that does not conform to the faux radical’s liberal standards is fair game to correction by their enlightened guidance, or outright belittlement and abuse. So I have found in my own experience as a so-called “person of colour” — I have gotten more abuse in concerns to the un-liberal components of my cultural upbringing and my lack of bourgeois mannerism from my self-proclaimed allies than I ever have from the rare encounter with the outright “racist.”

“It is ironic that these moralists should be so colonialist” (D’Andrade, 1995), and at first brush mystifyingly so, due to their common attestation of hating colonialism — though it all becomes clear when you remember, again, that such radicals are, again, liberals, status quotidians, carrying on their tradition of ethnocide in their own small ways for the sake of “progress” and capital. And in their logic, 2+2=5 — they insist their words should be regarded as or before reality, not their actions (or lack thereof). So if they say they say they are the gods’ gift to mankind, despite being, objectively, some of the worst specimens of mankind in their moral bankruptcy and narcissism, then you had best believe them — or they will do everything they can to character assassinate you or attempt to socially  ruin you, like the Bodhisattvas and saints that they are. 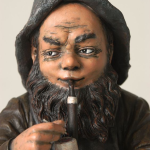